Our September 22 meeting will include updates on all of the communities-in-formation, including a special video appearance by Mike Bellamy & Peg Hoh (on their 29th wedding anniversary, no less!). We’ll also demo the new Co-op web site, and discuss how we can create an online listing of interested cohousing participants. 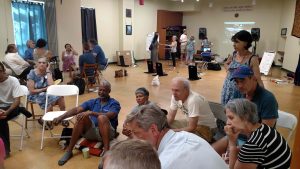 As we did last month, we’ll be meeting at the Princeton IYCC at 2:15 p.m., having the meeting – and then having a potluck starting at 5. Bring something yummy to share.

* The Studio is located in the Princeton Shopping Center above the McCaffery’s Market. As you face the Market from its big parking lot, go to the far right side of the building and take the elevator to the second floor.

Meanwhile, the proposed NJ Cohousing Development Cooperative has gotten off to a bit of a difficult start. All of the original circles that were set up have met, and have done useful work and had important discussions.

Here, for example, is what the Membership Committee has developed.

What’s now needed is to translate all of this into further action. And frankly we need a lot more in the way of participation by the self-declared members of the Cohousing Development Cooperative.

If you’re one of those who expressed interest but did not join a Circle, or chose to step forward in some other way, now is the time to do so. What that looks like is really up to each of us as individuals, but your voices need to be heard, your needs, interests, and abilities shared, and your commitment fully engaged. Please step forward and be heard, acknowledged, and celebrated.

This entry was posted in Agendas, Cohousing, Event Listings, Organization. Bookmark the permalink.