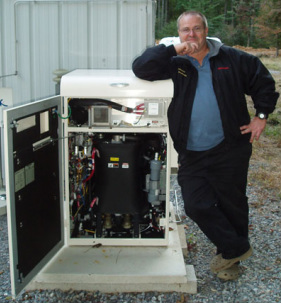 Hydrogen is the element that fuels the Sun. Mike has retrofitted his home in Hopewell to convert solar energy into hydrogen gas. The gas provides clean electricity by way of hydrogen fuel cells and can be stored indefinitely. He even runs his fuel cell car with the hydrogen his home system produces for free! Unlike fossil fuels that release CO2 and other emissions when burned, Strizki’s clean energy systems require no oil or gas wells to be drilled and emit only chemically pure water and oxygen.

As usual, on April 29 we’ll start at Noon with a pot-luck luncheon; please bring a dish to share. The house tour will begin at 1:00.

Mike Strizki served as Project Engineer for over 16 years with the Office of Research and Technology in the NJ Department of Transportation where he developed renewable energy technologies. In 2000 he took a position at Millennium Cell in Eatontown, where he completed a world range record with the New Jersey Genesis electric car (a distance of over 400 miles on a single refueling).

It was in 2006 that he converted his own home to run on solar-hydrogen power, including a hydrogen vehicle fueling station. He has installed similar configurations in the homes of some of the world’s most famous celebrities.

Recently he launched a non-profit organization, the “Hydrogen House Project,” which he envisions becoming a beacon for renewable energy worldwide, conducting research and development projects with the latest in solar, hydrogen, fuel cell and other clean energy technologies. The organization will share its achievements with the world through public education, student internships, and private and public partnerships.